CamMobSens is a project of Cambridge University, where they mount sensors on pedestrians and cyclists to monitor pollution and send back the information to a website as soon as it is gathered. In the figure above taken from their web page, pollution levels are proxied by the height of the plots. 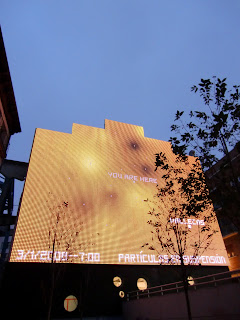 In the air has been selected as invited project to Visualizar 09 at Medialab-Prado, workshop directed by Jose Luis de Vicente, with Ben Cerveny from Stamen, Aaron Koblin and Manuel Lima as tutors and with the support of Bestiario.

We have developed the application in two aspects:

-we have added a timeline, which allows to navigate through the data by hour, day and month.
-we have studied the archived data to find patterns of behaviour of the components, relating them to the activities of the city. We have added tags which pop up through time, allowing the user to read the stories behind the data.

We have developed as well an application for the digital facade, which consists on a changing heatmap with the location of all stations.

biological agents in the air

Other agents, other means, other scopes...Scarry, isn´t it?

Research on a new sensing device able to simultaneously identify more than 3,000 biological materials shows great promise, says one of its developers, Ravi Saraf of Virginia Tech's chemical engineering department. Saraf, who holds 27 U.S. patents, hopes such a device will have multiple military and industrial applications, especially as concerns continue over the threat of terrorist attacks.

A key advantage of this new sensor is its ability to detect a specific biological agent even if its trace amount is only one part per billion in a sample volume of air or water.

The new detector or biochip under development has an optical based system. Its designers have increased the sensitivity of what the chip can "see" or sense, consequently improving its response...
Publicado por nerea calvillo en 6:52 No hay comentarios: 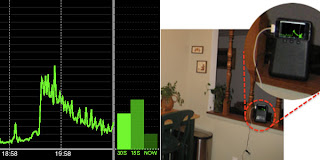 It is a project of Sunyoung Kim & Eric Paulos, at the Human-Computer Interaction Institute, Carnegie Mellon. 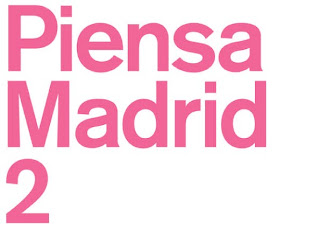 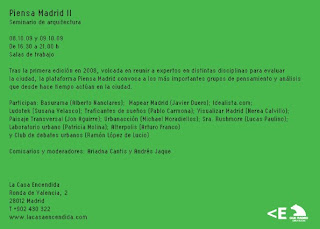 Yesteday we had the chance to present the project in Piensa Madrid 2, a seminar curated by Ariadna Cantís and Andrés Jaque in its second edition. It was interesting to identify the different points of view from the platforms we shared the table with: Ludotek and Traficantes de Sueños.
Publicado por nerea calvillo en 6:00 No hay comentarios:

We presented the Diffuse facade at the Urban Screens and Public Space Seminar.

A great article which contextualizes our facade has been written by Gregg Smith, a Toronto-based designer and researcher interested in media and technology, and collaborator of In the air.
Publicado por nerea calvillo en 5:47 No hay comentarios: 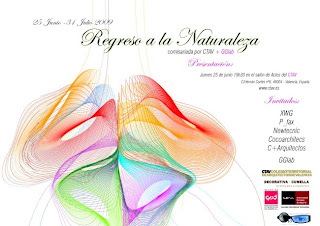 Back to nature was curated by Green Geometries Laboratory (GGlab). It took place in Valencia ( Colegio Territorial de Arquitectos de Valencia) and In the air was selected as one of the projects which deal with the capacity of computing design to relate/replicate/realte to nature.
Publicado por nerea calvillo en 5:38 No hay comentarios:

Etiquetas: Back to nature, CTAV, GGlab

In the air was selected by Valentina Montero for the Bienal´s international curatorship. We did as well a workshop to build Santiago de Chile in the air. We will lounch the aplication soon.
In the workshop participated Chirstian Oyarzun, Ricardo Vega, Fran and others (please, write because the list was stolen!)
Publicado por nerea calvillo en 5:18 No hay comentarios: 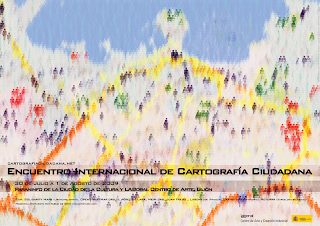 It took place in Gijón in July, and was an incredible meeting organized and curated by Pablo de Soto of Hackitectura. It consisted on presentations and open workshop sessions. Check out the web to view the list of participants, and its great review of Beatriz Belmonte in elprincipiodeincertidumbre.
Publicado por nerea calvillo en 5:03 No hay comentarios:

In the air in Continuum Electronica

Continuum Electronica´s exhibition was curated by Valentina Montero and organized by MECAD. It took place from 04/04/2009 to 10/04/2009 at L'Estruch
Publicado por nerea calvillo en 10:01 No hay comentarios: 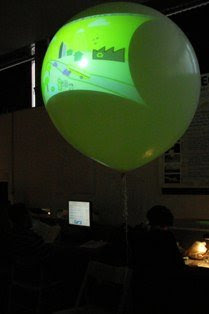 Susanna Tesconi, collaborator of In the air, has developed in Medialab-Prado´s Interactivos 09? the project Glob@s (http://servidor.medialab-prado.es/blogs/globos/)

Glob@s is an educational experiment in which children are invited to use a DIY air monitoring device to explore their neighborhoods and urban environments for pollution.

Children are able to see pollutant levels in their current locations. The information is supplied by an interface easy to use that choose symbolic forms of pollutants and through animations represent their consequences on the environment.

The potential for work in teaching this content goes beyond the issues related to pollutants, addressing historical, geographical, demographic, economic, among others issues.
Glob@s can be a starting point for interactive, real-time and integrated through the web platform for reflection and analysis of how our actions and behavior interfere so directly in the air we breathe.